The United States of America is a long, winding road comprising the twists and turns of history, the elevation of magnificence, and the lows of despair. All of it is a testament to what we once built, together.

Behind us are the devastation of wars, glories of overcoming the impossible, scars that cut so deep there are marks in our very bones. All of it is there, a record that humans lived, existed, and constantly rebuilt.

However, ahead of us the bridge is out. The road isn’t just broken; it’s completely destroyed. Asphalt is cracked in thousands of pieces, the very ground heaves upward, and the trees that stood sentinel have fallen.

I am known to be an optimist, but at my core I am a realist. I have a profound belief in the power of human strength and the capacity to choose our own fate.

This is my belief in our human condition: we are as weak or powerful as we believe ourselves to be.

In this moment, I see a completely broken system that has failed every person who exists under it. In a time where knowledge is more important than ever, the truth is suppressed for political, business, and ideological reasons. Truth is mocked, facts are berated, and those who speak both are attacked.

Over the last week, a Biblical quote has floated in my mind, and I haven’t stated it because, while I believe in God, as a Catholic, I do not want to distance those who choose not to believe. If you’re reading this, and not a believer, I hope you will permit me to go back and forth throughout to speak about God and the so-called religious right’s total and utter hypocrisy in their intolerance of those who are different than them.

Know this first of all, that in the last days scoffers; will come [to] scoff, living according to their own desires- 2 Peter 3:3

Now, it is impossible to know when the end of days will come for us, but this passage is true in this moment. Like many Bible passages, there are many interpretations. In my view, this passage describes those who attack truth-tellers who speak out about human rights, the indignities of racism, the marginalization and destruction of those who live, love, believe, or look differently.

Does that make me morally higher than they are? Or is this a sticks and stones type of thing where hate begets more hate?

In the end, I find myself looking at the great moral argument that should have ended 150 years ago: racism and slavery. In reality, it should never have happened in the first place. I find my own comfort in knowing and understanding that though racism is alive and thriving, I am a force against it, however small. I am a force for human rights, equality, and compassion.

I grew up with a Puerto Rican family. My best friend and I were inseparable and our families sort of merged. They accepted me into their home, taught me so much, and gave me a lifelong love of their cuisines, customs, and humor. It angers me on a familial level to hear the racism that I do against Hispanics. Some of the most humble, hardworking, good people I have ever known have come from these families. Their capacity to love America, embrace their roots, and forgive others for their ignorance is beyond my comprehension, and I am in awe of their ability to be better than those who marginalize them.

“Terror is to Islam what the KKK is to Christianity.”

Those who follow me, what TV show am I quoting?

Of course, the current GOP says things like, “All Muslims may not be terrorists, but all terrorists are Muslim.” The stupidity of this aside, what about the Muslims who work more hours than there is daylight? What about those who serve in our police forces, fire stations, and military? Those who are Muslim deserve every right that any American citizen has. Yet, many spend their days terrified of being accosted at the grocery store.

Consider the plight of the true natives of our nation, those who were here long before any European settler ever turned up, those who received arguably the cruelest of fates America has ever given, that of genocide, the trail of tears, and a million other injustices that white men inflicted on those they felt were lower. And in the end, in modern times, they still are fighting at Standing Rock, rebelling against the same injustices inflicted upon them over the entire course of American history.

And if these are what and whom I am for, then whom is my opposition against?

That is why I feel confident in my views.

My soul isn’t pure like those who have stated eloquently to not give in to hate. As I said, I am not perfect, and my hatred of those who hurt others runs deeper than my compassion to forgive them when the oppressors themselves have no sorrow, use their religion to persecute others, and spend their time inflicting pain and fear into those strangers that I do love and respect.

As G. K. Chesterton so piquantly stated, to truly fight for your passions, you cannot fight because you hate what is before you, but because you love what is behind you. The Bible words are not enough; like the Declaration of Independence or the Constitution, it’s a living document interpreted and acted upon in the moments that you need it. There is a faith that is required of all of us to trust in God, or to trust in law, but there is a higher faith:

We must exercise faith in one another.

We have to fight for those we love who stand behind us, for truth, for everything we are passionate about, because our opponents want to destroy it all.

They want to destroy truth. They want to oppress us for whom and what we love. They want to end all of the things that make America beautiful, then scream in our faces and call us traitorous cowards. We can’t let them have a single inch.

America is already great, but we can exorcise the ghosts of our past and make right what and whom, we have wronged. Extend the hand of friendship and help one another off the dirt and truly be one nation. 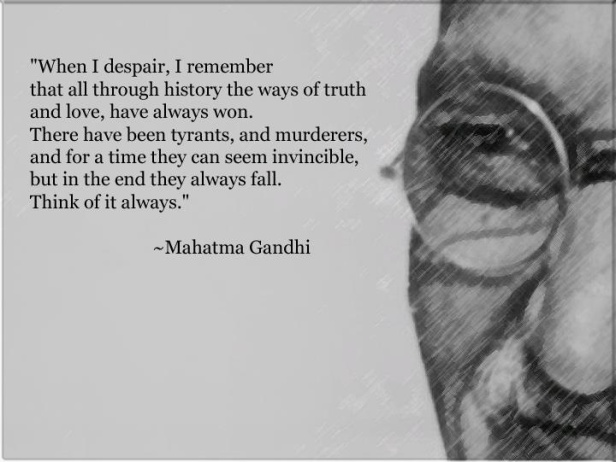 Let’s cast those who divide us to the fringes once and for all and build an America that we can really be proud of, together.

History is the greatest barometer of all, and it does not look favorably upon the tyrants, the bullies, the despots, their hatred or racism. They always crumble when people all stand and say, “Enough!” This entire American experience started with a document that stated: “We hold these truths to be self-evident, that all men are created equal.”

But, that is a living document, and when it was created, only white men were created equal. All else was below them, including women. We are writing our story as we go along, and we have to right the wrongs together, embrace the truths — if we want that document to matter.

So, if you are sitting in your home right now wondering if there is a precedent to beat back oppression, we have been doing that sort of thing from the beginning. We are old-school knife fighters. We did it to King George, we did it to Hitler and the Nazis, we did it to Japan, we did it to McCarthyism, we did it to bigots, racists, segregationists, and we will do it to the Republicans as well.

Whoever oppresses the poor shows contempt for their Maker, but whoever is kind to the needy honors God.

How do we repair this shattered road that we are staring at, dead ahead, while we have a group of people who claim to know God yet clearly have read, maybe heard, but never listened to what the Bible has asked of them?

We have presidential candidates who claim that God came to them and told them to run for office.  Yet they do everything in their power to oppress the poor, the hungry, and the broken.

I am not saying you all are dishonoring God; He is.

I know how to fix the road and continue forward, and it begins and ends with beating back those who broke it in the first place. This is a philosophical time. It’s also a fact-based time. I am not going to engage with those who embrace hatred. I am not going to attempt to explain my thinking to them. I am going to engage with those who need those of us who fight to protect what we love and can be an example for others.

It is winter, and brutal snow and cold are coming. But then spring, summer, and autumn always arrive. Life is a cycle of constantly changing seasons; we have now arrived in our moment where we can effect change and earn the right to be a democracy again.

If you are uncertain, frightened, and don’t know how to lead, the first step is being vocal and calling out untruths. I know what we are capable of, so fear nothing — especially the ignorant.

Force your elected officials to stand by you, or remove them from the offices that they hold and replace them with those who will.

We will beat them intellectually.

We will beat them philosophically.

We will beat them on the ground.

We will beat them on the ballots.